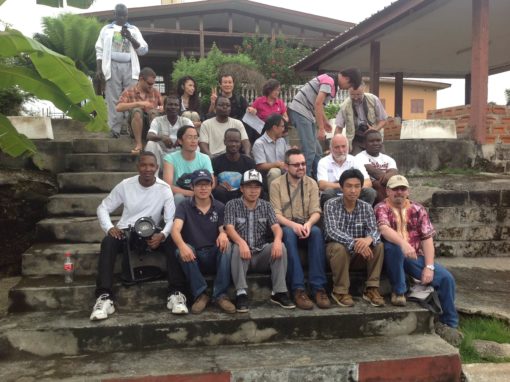 For a few minutes on November 3, people in South Africa could observe a partial solar eclipse, as the sun rose partially covered by the moon. Filters or other viewing apparatuses and unencumbered view of the western horizon were the only requirements to view the eclipse from the South Africa.

With a first contact at about 14:00 UT on the west coast, a solar eclipse swept across Africa with a focal point of attention in Gabon where Dr. Patrice Okouma, research fellow in cosmology with AIMS (jointly with UWC and UCT/SAAO) and head of NOMMO ASTRONOMIA (society for astronomy and space science in Gabon) led a team of close collaborators to:

a) organize the first week-long workshop on astronomy and space science in Libreville, capital city of Gabon from October 28 to November 3 ;

b) facilitate a key workshop of the International Astronomical Union (IAU) Office of Astronomy for Development (OAD), based in Cape Town, South Africa. The aim was to discuss the feasibility of a French language node for astronomy resource and expertise sharing. It was held from Nov. 4 to 5 in Libreville, at the headquarters of the Gabonese Space Agency;

c) facilitate two scientific expeditions. The first one led by Prof. Jay Pasachoff, professor of astronomy at Williams College (USA) and chair of the International Astronomical Union’s Working Group on Eclipses. The second one led by Prof. Zhongquan QU, solar physicist with the Yunnan Astronomical Observatory (China) who came to test in a real life situation a second generation polarimeter called FASOT.

The workshops  were possible thanks to financial support from the the OAD, the International Center for Theoretical Physics (ICTP) as well as a generous sponsorship from the “Lycée International Berthe & Jean”, an ambitious academic institution in Libreville. The week long workshop drew predominantly teachers and University lecturers on two complementary sites in Libreville. Following this success, plans are under way for the first regional School of Astronomy and Space Science for Central Africa (SASSCA) in 2014, with the goal to set it as a biennial school. The OAD meeting was well  attended, with participants from all over the world, a few of them physically present and the rest via skype. “It was a successful event”, Dr. Jean Christophe Mauduit and Prof. Claude Carignan said after the event.  Follow up initiatives to both workshops will be key in integrating “French speaking Africa” with growing pan African science and technology initiatives such as the SKA and the African VLBI Network, while widening the pool of future users for MeerKAT, SALT and HESS.

Back to the Sun, there are total solar eclipses about every 18 months and annular eclipses (with an annulus, a ring, of the Sun remaining visible) visible also about every 18 months. This year’s eclipse was of a hybrid type, beginning annular and then turning total for the rest of the path. In West Africa, the eclipse began over the Atlantic with the point of longest eclipse over the ocean, slightly south of Cape Verde. Our team viewed the natural phenomenon from Benguie IV, a site close to the line of centrality in the band of totality. The same site also hosted the President of Gabon, as well as a large number of eclipse chasers.  Totality appeared in the middle of Gabon for about one minute. This was the longest totality was visible on land. After Gabon, the eclipse continued across Africa through the Congo, through northern Uganda and northern Kenya, ultimately ending in Somalia.

The Next time a similar natural phenomenon will occur with such a Pan African reach will be during the annular eclipse of September 1, 2016. That year the  regional school of astronomy and space science for  Central Africa (SASSCA) should be in its second edition, with potentially a French language node for astronomy resource and expertise sharing fully functional.

More about eclipse in general at: http://eclipse.gsfc.nasa.gov/eclipse.html