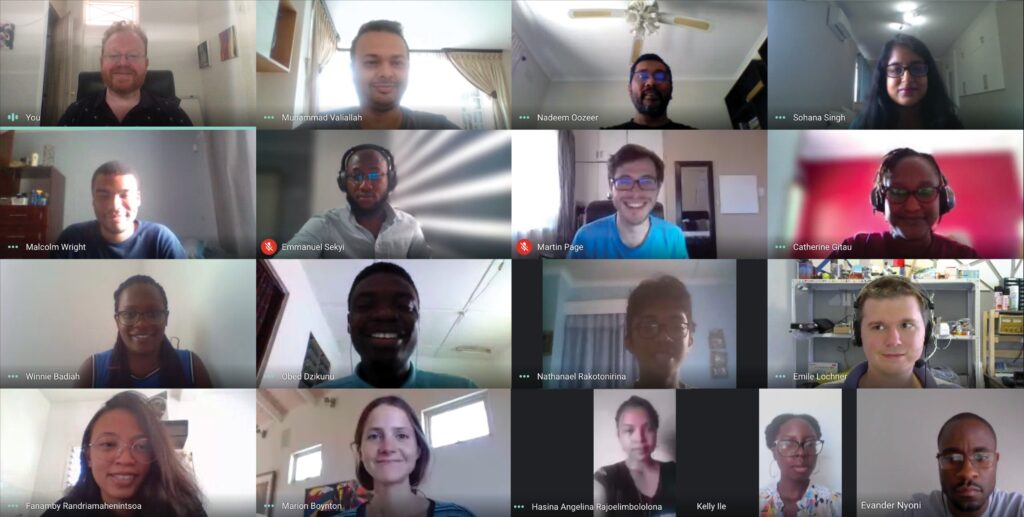 The Africa Data Science Intensive (DSI) Programme uses real-world problems to give participants hands-on knowledge of the latest algorithms and techniques in data science and artificial intelligence, deep insights on industry trends, network building and practical team skills used in business to facilitate transitioning to a data science role in industry, academia or through entrepreneurship.

The programme commenced in September 2020 with 16 participants (50% of which are women) chosen from eight African countries and an initial pool of 1,430 applicants, showing the huge demand for data science and artificial intelligence training in Africa.

In 2020 the Africa DSI programme was adapted as an online half-time course due to the COVID-19 pandemic mixing lectures and real-world projects. Lecturers for the course came from all over the world including large organisations such as Airbnb, Cambridge, DeepMind, Google, IBM and Netflix as well as young African startups.  The online course consisted of four modules that was actively carried out over a period of five months with the final module ending on 29 January 2021.

The top five presentors were selected to give presentations to a panel of judges on 29 January. The winner of this final presentation was Mr Nathanaël Rakotonirina, from Madagascar, who gave a presentation titled: ‘Video Analysis’ in which he presented work done on object detection in various real-life business environments.

Mr Malcolm Wright, from Botswana, was the overall top participant for the Africa DSI 2020 programme, with Ms Fanamby Randriamahenintsoa, from Madagascar, in second place and Mr Martin Page, from South Africa in third place. Prof. Bruce Bassett also noted, “Seven of the top ten participants were women and there were three or four people within 1% of third place so it was very competitive.”

Ms Sohana Singh spoke on behalf of the participants and said, “We are certainly all honored to have been selected for this opportunity and I can confidently say that we have all grown during this experience. Unlike the usual scenario where you have lectures and participants follow along, in the DSI we were given real world problems to work on in teams of four and we had to achieve a minimum viable product (MVP) in a relatively short amount of time. I thoroughly enjoyed this way of learning as it was much more challenging and allowed us to push ourselves and learn things about ourselves that perhaps we didn’t realise before or think we were capable of doing. Some of us had never worked in teams before and had never used the SCRUM method before and through this experience we learned how to select the best person for each role in the team, how to ask for help and support and also how to be organised and prioritise. I think we are all now equipped to tackle any data science project that is thrown at us.”

She added, “Even though the DSI had to be held online this year, the organisers still managed to go above and beyond, to make it enjoyable for us, even now, as I look back, I look back fondly and I would definitely do it all over again, even the tough challenges. So I do hope that the DSI will continue for many years to come and enrich and inspire many more future data scientists.”

The lead organiser of the Africa DSI was Prof. Bassett, Head of Data Science at SARAO, Head of the Cosmology Group at AIMS South Africa, Professor of Mathematics at the University of Cape Town and research astronomer at the South African Astronomical Observatory. There have been a variety of local and international lecturers on the course and the participants are supported by four tutors, Dr Nadeem  Oozeer (SARAO), Mr Emile Lochner (Soldersmith) and two DSI 2018 alumni Mr Evander Nyoni and Mr Emmanuel Sekyi.

The programme sponsors were the UK – South African Newton Fund, SARAO and the South African Development in Africa with Radio Astronomy (DARA) BIG DATA AFRICA Programme. The DSI was done in collaboration with AIMS South Africa, Grailabs and the University of Portsmouth.