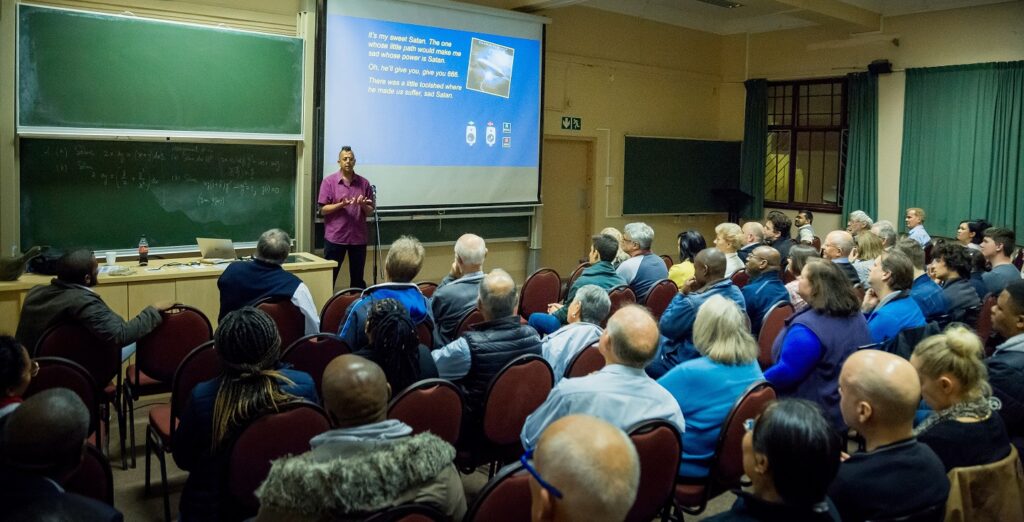 “Mathematics is an internal game played by mathematicians according to the rules set out by the mathematics community,” said Dr Simon Singh, British author, journalist, and television producer during his public lecture titled: ‘The Science of Secrecy’ at AIMS South Africa on 10 June 2019.

Dr Singh enthused the audience with the beauty of code breaking and mathematics by reflecting on the books he has written over the years.

“There is so much mathematics hidden in the Simpsons and Futurama,” said Dr Singh, making reference to his book titled “The Simpsons and their Mathematical Secrets”.

During his engaging talks, he played the song Stairway to Heaven by English rock band Led Zeppelin, and asked the audience to listen to the lyrics carefully in order to point out the words they heard. No one in the audience seemed to have picked up any of the words he asked if they had picked up. He then played the song backwards while projecting the words. Interestingly, they all said they heard those exact words the moment he projected them. This, Dr Singh emphasised, is just our brains actively tricking us into hearing things that are not there.

“When you are actively looking for things, you find them…Our brains actively trick us into seeing things that are not there,” said Dr Singh.

Dr Singh also enchanted the audience with a story of how he corrected Katie Melua’s error in her single Nine Million Bicycles, where she sings that as a “guess”, the edge of the universe was “12 billion light years away”. This correction ultimately led to Katie Melua re-recording her lyrics with a more accurate 13.7 billion light years.

He has written five books to date. He is known for Fermat’s Last Theorem, The Code Book (the science of codes and code-breaking), Big Bang (the story of the Big Bang), The Simpsons and their Mathematical Secrets (mathematical ideas and theorems hidden in episodes of the Simpsons and Futurama), and Trick or treatment? (Alternative medicine on Trial).