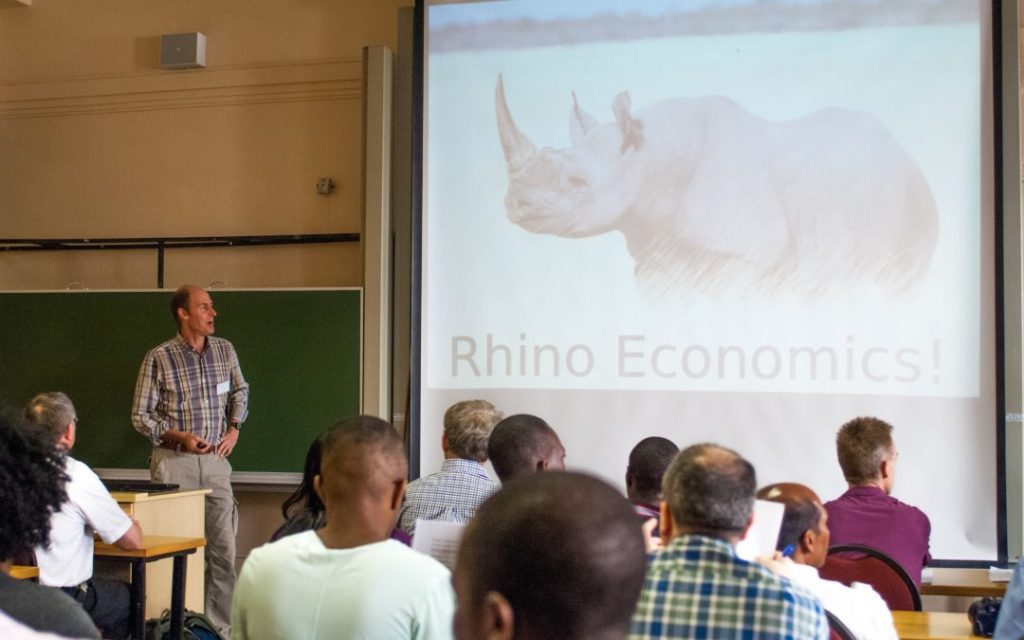 South Africa’s white rhino population is under persistent threat from illegal killing (poaching) to supply the demand for rhino horn in East Asia. Could mathematical modelling help supply the answers to save the rhino? Leading mathematicians in the application of mathematics in industry will be participating in the 12th Mathematics in Industry Study Group (MISGSA) being held at the African Institute for Mathematical Sciences (AIMS) South Africa from Monday 12 January 2015 to Friday 16 January 2015. This workshop is co-hosted with the University of the Witwatersrand and the lead organiser is Prof. David Mason from the WITS School of Computational and Applied Mathematics.

At this five day workshop, academic researchers and graduate students from all over South Africa work collaboratively on problems submitted by local industry. This workshop is preceded by a four day graduate workshop where the problems are introduced and studied prior to the event.

One of the five problems being explored this year covers issues relating to rhino conservation. In particular the potential impact of two policy options: legal trade or no legal trade and examining the interactions of three parties: intensive managers, extensive managers and poachers. Ultimately the aim of the study group is to model the potential conservation impacts of several different scenarios, including one in which existing stockpiles of previously harvested horn are released onto the market.

Other problems to be explored include energy efficiency index for sugar cane processing, semi-automated photograph matching for plant conservation, the influence of bond-strength of Thin Spray-on Liners (TSL) in ground stabilization in the mining sector, and automated quality control of tempered glass.

About the Mathematics in Industry Study Group

The Mathematics in Industry Study Group is a five-day workshop at which academic researchers and graduate students work collaboratively with representatives from industry on research problems submitted by local industry.

Group meeting and a full technical report on each problem is published in the Proceedings later in the year. Study Groups have been organized for over forty years in many countries around the world. The first Study Group in South Africa was held at WITS in 2004.

Please click on the links below to view more photographs from the workshop.