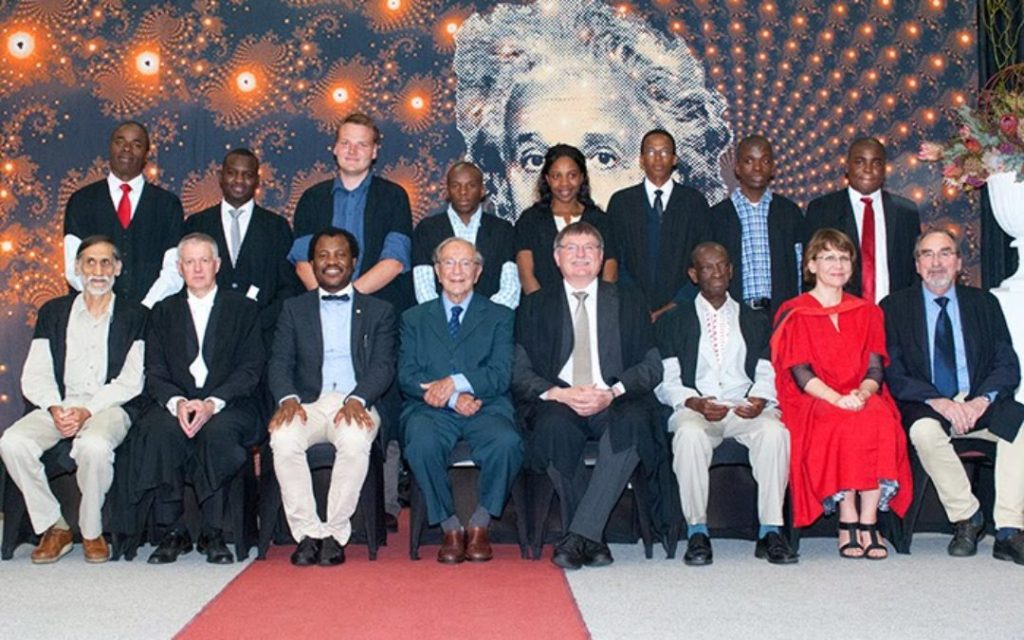 AIMS South Africa (AIMS-SA) has honoured its second group of South African students at a special Recognition of Achievement Ceremony which was held at the Institute in Muizenberg on 19 November 2013 where the success of eight students was acknowledged. Since opening in 2003, AIMS has been challenged to attract South Africans onto its core programme, now a Master’s Degree which normally starts in August. By introducing a January intake, which suits the South African academic year, the Institute now enrols students from all over the country.

During the ceremony, AIMS announced a new scholarship award, the Ben and Mary Turok Award for Excellent Achievement, which was generously donated by Prof Neil Turok, the founder of AIMS and Director of the Perimeter Institute for Theoretical Physics in Canada. This award has been donated to honour the very generous role Ben and Mary Turok have played in establishing the first AIMS Centre in South Africa and their continued interest and support of this Pan-African project.

Handing over the award to Mr Matthews Sejeso from Taung in the North-West province, Prof Ben Turok said, “I am deeply moved that a South African student has won this award as his success can now be a symbol for children in township schools that there is a future they can aspire to.” Mr Sejeso said, “The award was very unexpected but I am very glad to have received it. AIMS has exposed me to very different and exciting things, the best lecturers and the best possibilities. AIMS has taught us all how to communicate and this is what makes it different from universities.”The guest speaker at the event was Dr Zeblon Vilikazi, Director of iThemba Labs. He congratulated the students and told them that the skills they had obtained at AIMS, “the powers of logic, rigour, reason and questioning” are prestigious skills making them critical thinkers who can help tackle global issues. He advised the students that to be successful one should find a mentor, “who can give you sound advice, inspire and motivate you”; a collaborator as “collaboration is an important ingredient of success”; and to “love what you do”.In her student address, Ms Qondisa Ndxanga, said, “AIMS is like a prison with open doors and no security, you want what AIMS can give you so you do not leave.” She started her journey at AIMS when Prof Francis Benyah (UWC) suggested that she go to AIMS to be transformed. “At AIMS I learnt to communicate, to network and to understand the cultures of different countries. I truly learnt the meaning of Ubuntu, through the humanity and kindness at AIMS. I have found my calling, it is not about how much money you can make but about what you can do to help the person next to you. If each of the 478 AIMS alumni reach out to just one child imagine what we can achieve. Let’s make Africa a better place, I really believe that we can.