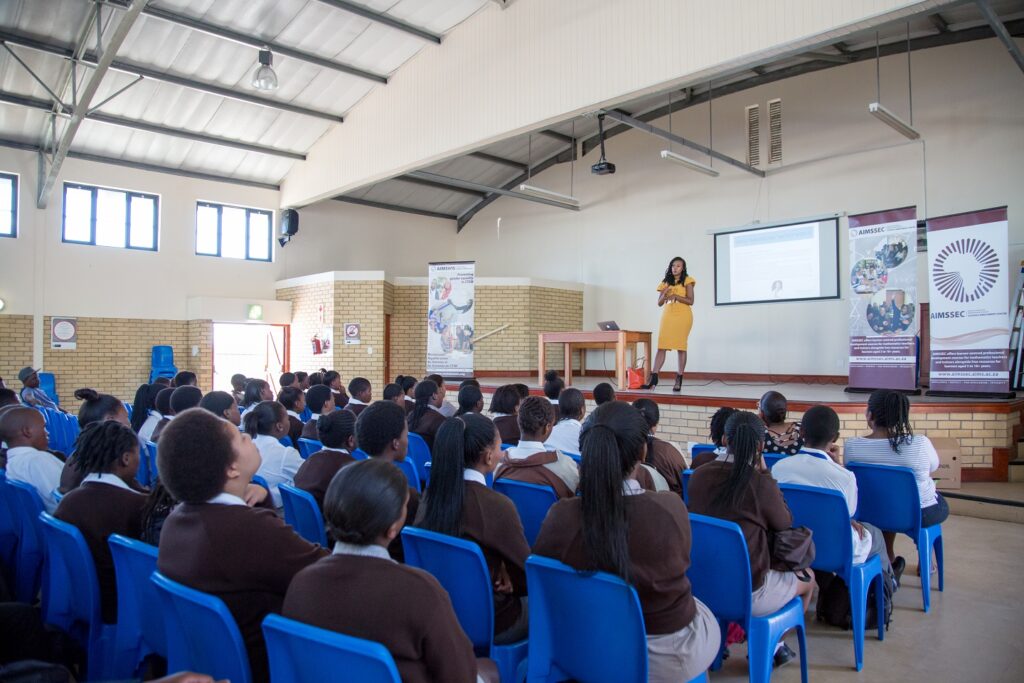 Encouraging young women to enter the exciting world of science

As part of our efforts to encourage more young women to enter the exciting world of science, AIMS South Africa and AIMSSEC, arranged and hosted a variety of events to celebrate International Women’s Day which took place on 8 March 2016.

The events took place from 7 to 11 March and included visits to local high schools by staff members and women role models in STEM fields, a public lecture and a panel discussion by women scientists.

These activities form part of the AIMS Women in STEM Initiative (AWIS) – our flagship programme which was recently launched dedicated to accelerating the progress for African women in STEM through evidence-based reporting and advocacy, leveraging increased investments, adoption of best practices, engaging men and collaboration across the African women in STEM pipeline.

“At AIMS we are looking to level the playing field by closing the gender gap for African women mathematicians and scientists and engaging men in this process,” said Ms Karen Craggs-Milne, Director of Gender Equality Inclusion Director for AIMS.

The public lecture titled: “Women in Science and the science of women – studying microbiomes” By Prof. Nicola Mulder, Computational Biology Group, UCT was held on Tuesday 8 March at 7pm at AIMS South Africa.

AIMSSEC visited various schools daily on a roadshow and attracted many learners and teachers. They presented learner-centred fun activities including solving a murder mystery, investigating Euler’s theorem, making three dimensional objects and a quiz in mathematics  language. Most importantly, learners benefitted from motivational talks by various successful guest women speakers who are from a range of STEM careers.

The murder mystery got learners involved in problem solving, logical thinking and making calculations to determine which of the murder suspects could have committed the crime. The language mathematical quiz got learners to discuss and work collaboratively to debate different meanings of the most common terms used in mathematics. Younger learners were given sets of shapes that they used to build complex three dimensional objects. Learners in this activity discovered how architects and engineers use mathematical formula to determine the number of faces, vertices and edges without physically counting on the structure.