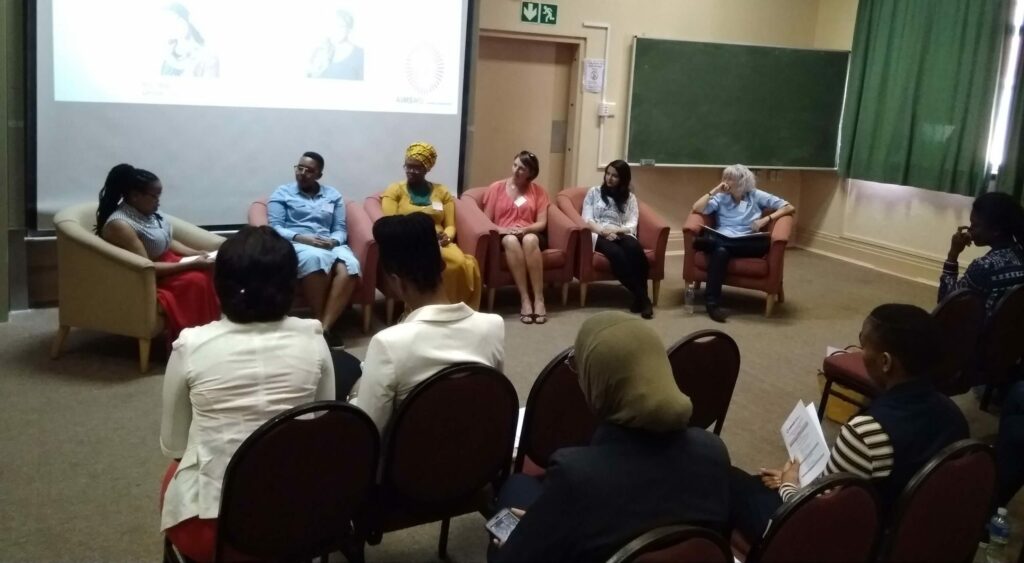 The AIMS Women in STEM (AIMSWIS) Initiative held its annual Mentoring and Networking Event on 30 November 2019, at AIMS South Africa, under the theme “breaking the glass ceiling”. This year’s theme served as a call to direct attention to and celebrate women who have broken through the metaphorical glass ceiling that seems to permeate the STEM landscape.

The event welcomed more than twenty AIMS Structured Master’s students, alumni, researchers, and businesswomen who came to share their stories and inspire fellow women in STEM at AIMS South Africa. The event featured an insightful keynote address, panel discussion, interactive mentoring group activities and games. Prof. Fanelwa Ngece-Ajayi, Associate Professor in the Chemistry Department and one of the research leaders at SensorLab at the University of the Western Cape, spoke on the topic “My Versatility, My Superpower”. She began her talk by taking the participants through the differences between a scholar and an academic and also touched on interdisciplinarity, multidisciplinarity, and transdisciplinarity in research.

“To make Africa shine, we need unity between academia and scholarship. Interdisciplinary areas are essential for African women to work together,” said Prof. Ngece-Ajayi.

During her talk, Prof. Ngece-Ajayi highlighted some of the common challenges often faced by  women in STEM, mainly being that women have to focus on building their careers on the one hand, and on the other hand deal with family responsibilities, demotivating institutional cultures, cultural and traditional norms that deter them from having careers, and lack of female role models.

“The fact that we are all here is the best indication that we have broken the glass ceiling,” said Prof. Ngece-Ajayi.

During the panel discussion, Ms van der Walt gave the participants tips on the importance of networking and other crucial business skills; pointing out how she has garnered various skills throughout her studies as a masters student. She encouraged the participants to be adaptable to change and to know their values, but more importantly to always work with people sharing the same values as them.

“Do not be bought by money and end up giving up on your values,” said Ms van der Walt.

Ms Daumas spoke on her career shift and gave participants some pointers on how one finds their purpose in life. She spoke extensively about the importance of following your passion and doing what you love.

“I left my job because I was not living my purpose. I asked myself, what did I do with my day and what have I contributed to someone’s life?”,said Ms Daumas.

Ms Rizk spoke on her career plans and highlighted that she wants to stay in academia. When asked about her ten year plan, she stated that she sees herself working as a researcher and supervising postgraduate students. Dr Furey spoke on the importance of leaving a legacy in the sense that she has always wanted to make a contribution to her field; merging the fields of mathematics and physics in particular. Moreover, she gave students tips on how to deal with people that are doubtful of them and their skills.

“When people doubt you, they are often projecting their own insecurities on you,” said Dr Furey.

The AIMSWIS Mentoring programme was introduced by Ms Juliana Marcos, Research Master’s student, who in her talk took the participants through its purpose and implementation. During her session, she facilitated a group activity on the intricacies of mentorship, where the participants had to work in groups of 5 to answer various questions about mentorship, after which they were given an opportunity to join the mentoring programme as either mentors or mentees.

About the AIMSWIS Mentoring Programme

The AIMSWIS Mentoring Programme aims to encourage participation and retention rates of women in mathematical science careers and to build of a generation of female scientists who will act as mentors and role models in African communities. For more information see the AIMS House of Science website.