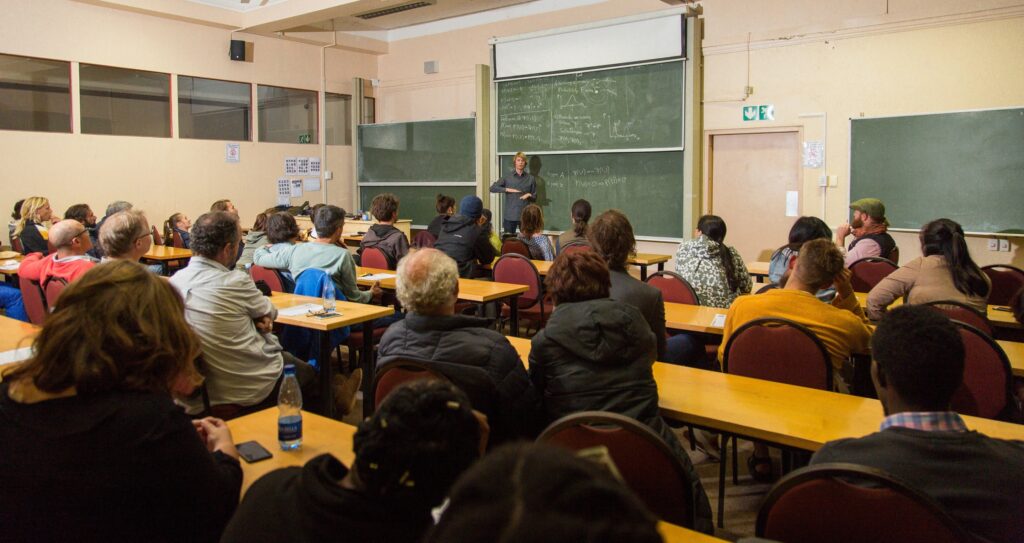 Public lecture explores the interface between basic and applied research

The 6th Muizenberg Festival took place from 7 to 13 October 2019. AIMS South Africa together with the Muizenberg Festival brought together experts from both basic and applied research in a riveting public lecture themed “Basic versus Applied Research” on 8 October. With the aim of engaging society, the lectures explored the interfaces between basic and applied research and between science and society.

Dr Nickelsen, coming from a basic research background introduced the audience to mathematics as a language used to formulate questions about reality through a talk titled ‘Mathematics, the language that answers when you speak it’. To emphasise his talk, he introduced a mathematical rule and the quantum mechanics of atoms. He took the audience through three rules of quantum: nothing is certain, particles are waves, and all are equal.

“Basic research is about exploring the laws of our reality, driven by human’s primary instinct of curiosity (instead of applications), but hoping it will not only satisfy our curiosity but also help solve problems down the line. And for some reason, mathematics is just the right language to do that.” said Dr Nickelsen.

In her talk, she stated how the bigger picture of the False Bay ecosystem has shifted due to climate change effects, population growth, political changes, water quality, pollution, and harmful algal blooms (HABs). She further made references to the level of marine litter and that the population size has doubled, while litter has tripled. She ended her talk by making several recommendations to ameliorate these adverse effects on the environment. The recommendations are that there is a need to generate better data from observations, a need to understand linkages and interactions, and a need to encourage community of practice, among others. On that note, she pointed out that they are training school kids in ecology to ensure awareness.

The lectures ended with a stimulating and interactive panel discussion by all three speakers and an in-depth question and answer session.