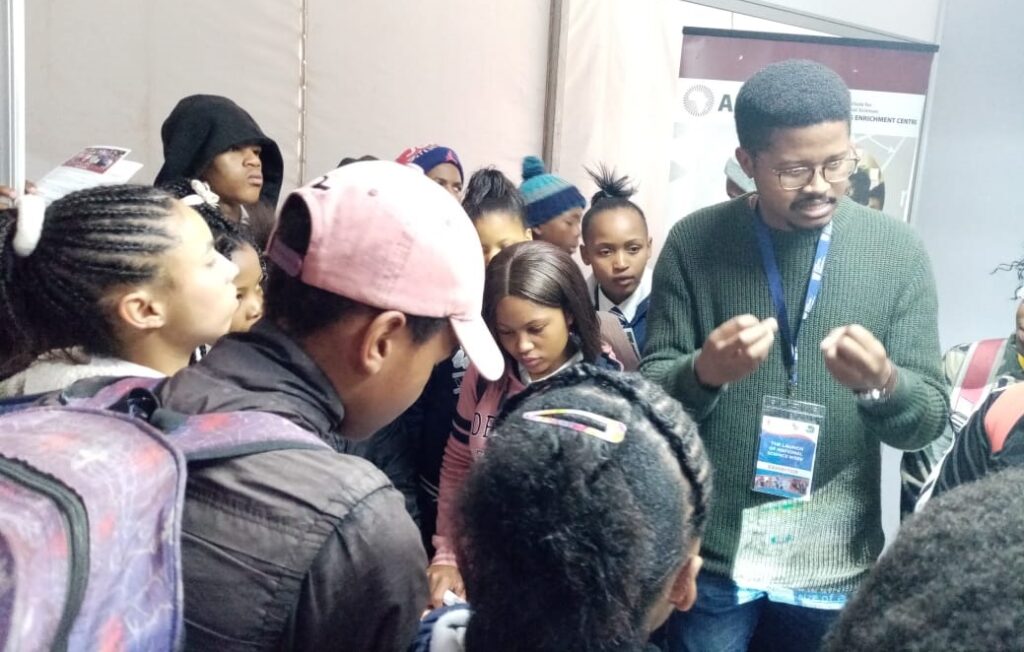 On 27 July AIMS joined over 70 science, technology, and innovation (STI) exhibitors from across the country at the official Launch of the 2019 National Science Week (NSW). The theme for 2019 is “Facing the harsh realities of climate change”, serving as a call to the public to act to protect the planet.

The event held at the Mittah Seperepere International Convention Centre in Kimberley, was officially launched by the Minister of Higher Education, Science and Technology, Dr Blade Nzimande. During his speech, Dr Nzimande called upon South African scientists to come up with evidence-based, innovative methods to respond to the global climate change and other related issues for South Africa’s future scientific development.

Researchers at AIMS have been addressing and understanding the challenges posed by Climate Change through Mathematical Modeling. The NSW 2019 Launch was an excellent platform for AIMS to share with the broader community the contributions of Mathematical Sciences to Climate Change research.

During the exhibition, Mr Mhlasakululeka Mvubu, Data Science Intern at AIMS, drew attention to the role of Artificial Intelligence (AI) and Machine Learning (ML) as a game-changer for Climate Change and the Environment in terms of monitoring agricultural emissions, deforestation, and the prediction of extreme weather events. He also excited and inspired the learners by touching on the role of Big Data in the fourth industrial revolution (4IR), some of its applications, possible career paths, and his career journey. Similarly, the exhibition served as an information desk about AIMS programmes, opportunities for graduates, learners, teachers, academics, researchers and the general public alike.

“It was an honour and great opportunity for me to represent AIMS and communicating my research with the broader community at this exciting event. I enjoyed motivating and sharing my career journey with the learners who were coming from the township, and who could relate with my story”, said Mr Mvubu.

This year’s launch attracted 2000 school learners from around the Northern Cape as well as several members of the general public. Also present were officials from government, cience councils and universities across the country.

The NSW is an annual week-long celebration of STI and one of the many Department of Science & Technology-led activities to build a South African society that is knowledgeable about science, critically engaged and scientifically literate.