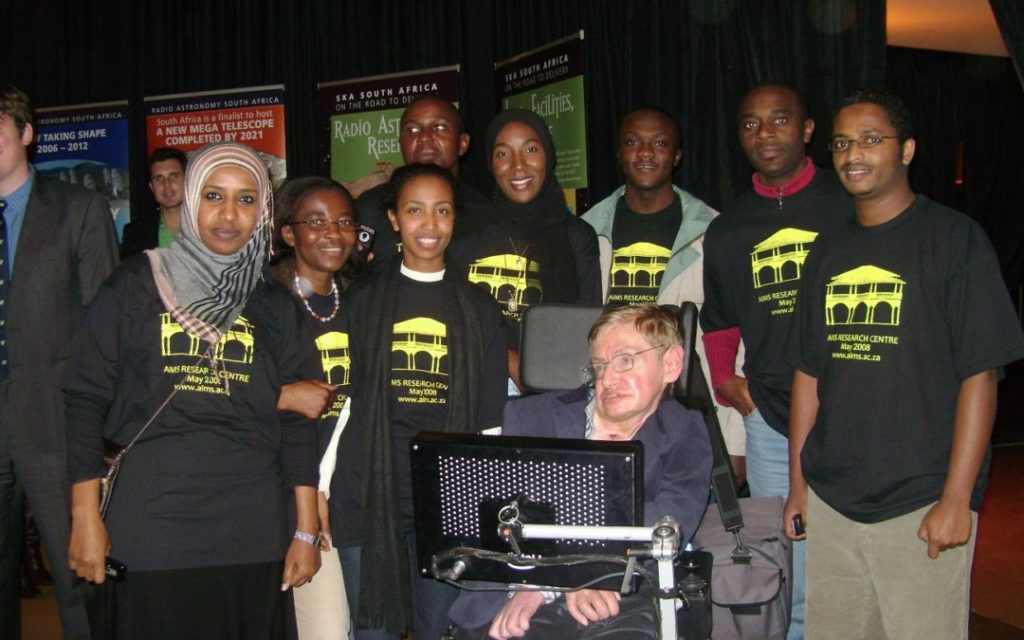 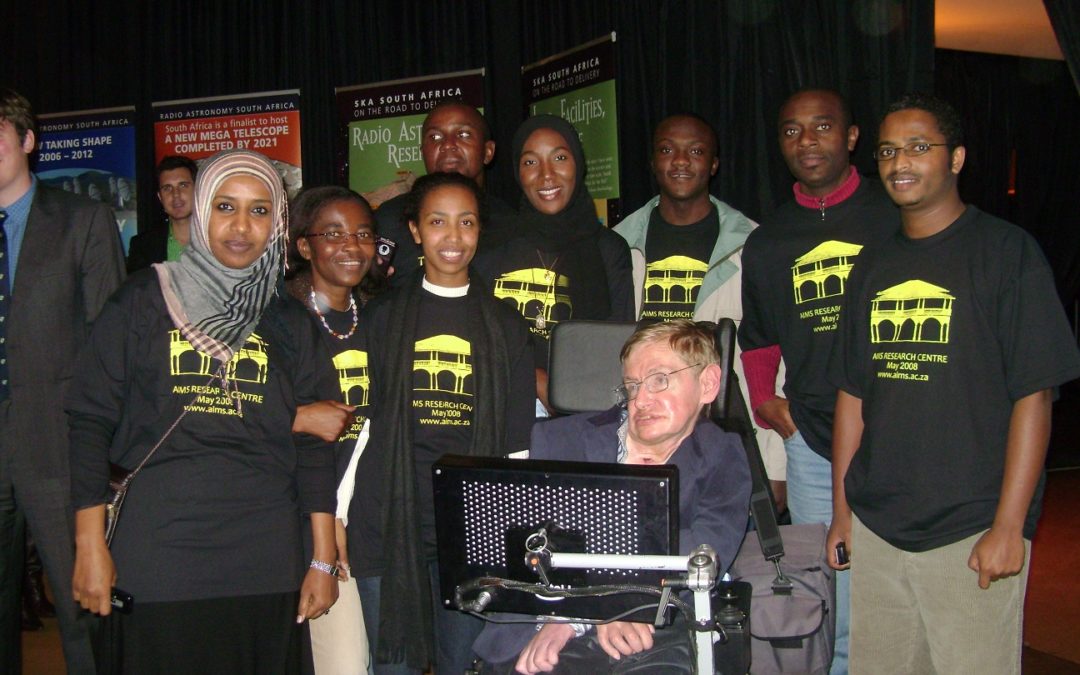 AIMS is deeply saddened by the news of the passing of Professor Stephen Hawking and sends its deepest condolences to his loved ones.

“Stephen was a huge supporter of AIMS. His only visit to Africa was in 2008, when he came to participate in the launch of the AIMS Next Einstein Initiative in Cape Town. He gave a public lecture at the Muizenberg pavilion – big crowds had to be turned away – and had lunch with the AIMS students, chatting amiably with them for a couple of hours. He flew up to Johannesburg to meet with Nelson Mandela. That was a special occasion – the two of them shared many fine qualities including an extraordinary intellect, as well as great charm and personal warmth. They both loved afternoon tea. Stephen also hosted a remarkable dinner in support of AIMS, in Los Angeles a few years ago. Morgan Freeman, Quincy Jones and Sidney Poitier attended, alongside five or six AIMS alumni as well as AIMS’ President and CEO Thierry Zomahoun. Stephen’s science, his great human spirit and his love for others were a shining example to us all,” said Professor Neil Turok, founder of AIMS and Director of the Perimeter Institute for Theoretical Physics in Canada.

Of his visit to AIMS Professor Hawking was quoted as saying: “The world of science needs Africa’s brilliant talents and I look forward to meeting prospective young Einsteins from Africa. If my visit helps to create opportunities for Africans to enter maths and science, I will be delighted.”

“The influence of Professor Stephen Hawking was not only limited to his brilliant mind and research accolades. He set an example in his scientific integrity and his humanity with his urgent call to safeguard humankind’s future. His life is a powerful example of what science can and should do,” said Mr. Thierry Zomahoun.

Since the time of Stephen’s visit to South Africa, the Next Einstein Initiative has opened AIMS centres in Senegal, Ghana, Cameroon, Tanzania and Rwanda. Over 1500 students from 43 African countries have graduated at Master’s level and above.

Professor Barry Green, AIMS Chief Research and Academic Officer and Director of AIMS South Africa noted, “Professor Hawking’s visit to our centre was definitely one of the highlights in our history. He inspired all the students that he met and his support of AIMS has left a legacy that will continue to inspire future generations of students at our centre.”

In addition, one of the focus areas in the AIMS South Africa Research Centre is Cosmology and Astrophysics. The head of this group, Professor Bruce Bassett noted, “He inspired us all by his genius and achievements, showing that disability and disease do not set a limit to our potential. Among many other outstanding contributions he showed that the Big Bang was an inevitable consequence of Einstein’s theory of relativity and that black holes are probably hot and can evaporate. He has inspired generations of scientists and lay people alike. It is truly a sad day for science.”

In tribute to his passing students at all AIMS Centres of Excellence will hold a moment of silence.