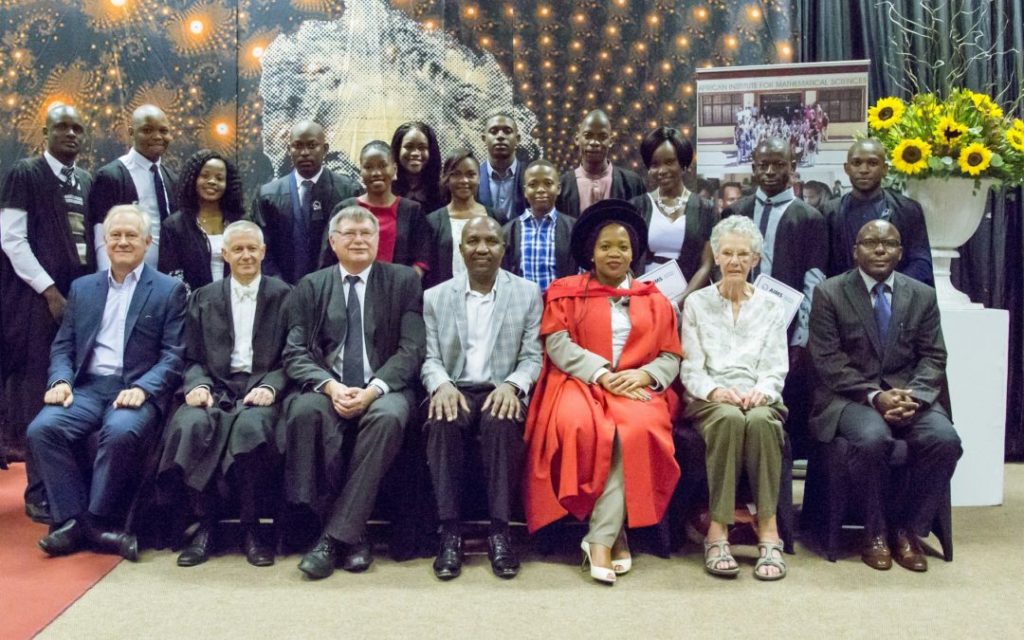 AIMS South Africa acknowledged the success of its fourth group of January intake students at a special Recognition of Achievement Ceremony held on 26 November 2015 at its centre in Muizenberg. Thirteen students (including 10 South Africans) received their certificates and will graduate through the partner universities that they are registered at.

The 13 graduates join the AIMS South Africa alumni group which brings the total number of graduates to 591 of which 30% are women from 35 different African countries, since the Institute was opened in 2003. In total, 47 South Africans (including 16 women) have graduated from AIMS South Africa.

Dr Thandi Mgwebi, Executive Director Research Chairs and Centres of Excellence at the National Research Foundation and member of the AIMS South Africa Advisory Board, was the main speaker. She told the students that they were very fortunate to be graduating from an institute that has prepared them very well, “not just in academics, AIMS has also taught you how to play your part in helping to improve the quality of lives on the African continent.”

Bursaries for South African students at AIMS are provided by the National Skills Fund and Mr Eubert Mashabane, Director: Strategic Projects, National Skills Fund also attended the ceremony.  He said, “AIMS has taught you to be independent thinkers now you need to decide what you want to do and what your role in society will be. One important role is for you to become mentors to the young people behind you so that they can understand the value of education.”

Ms Zinhle Emily Mthombothi, a South African student from Kabokweni in Mpumalanga, who completed a BSc and Honours in Mathematics and Chemistry at Rhodes University before joining AIMS South Africa, was awarded the Ben and Mary Turok Scholarship Award for Excellent Achievement. This award was created through a donation by Prof. Neil Turok, the founder of AIMS and Director of the Perimeter Institute for Theoretical Physics in Canada. The award honours the role Ben and Mary Turok played in establishing the first AIMS Centre in South Africa and their continued interest and support of this pan-African project.

Mrs Mary Turok, who presented the award, said “My hope is that some of you can help to find ways to address the problems this country and continent faces.”

In her address, Ms Mthombothi, thanked AIMS for the award and for the opportunity that coming to AIMS provided for all the students, “We will use it wisely, we will change the world for the better.”

Mr Mokgapi London Mashabela, from Groblersdal in Limpopo, also gave a student address at the ceremony. “My stay here was difficult but even so I enjoyed it and appreciated it. Just as a rough diamond has to be cut and polished, gold has to be moulded and a soldier trained, so too did we need to be moulded and shaped. AIMS has armed us with the weapons of maths, statistics and computation and we must use these weapons to go out and solve the problems facing our continent.”