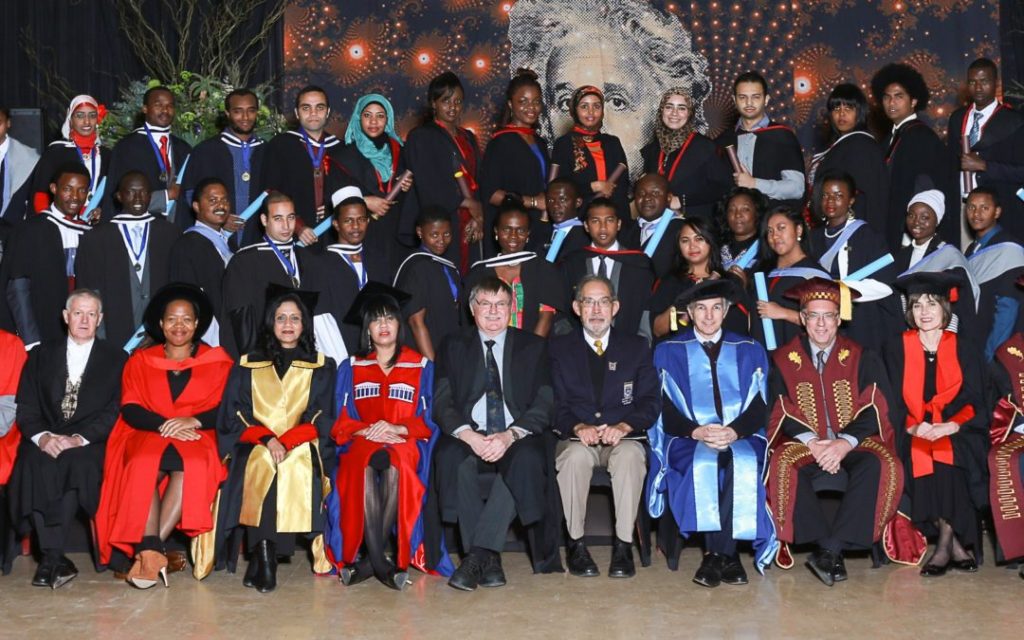 “It is great to see the potential here. Every generation has the burden of making sense of their environment to understand the past and project the future. For the first time humanity is up against an environmental change of incredible proportions, unprecendented in human history. It will take knowledgeable people who are strong enough and brave enough to deal with hard questions and hard answers and the AIMS graduates are a wonderful example of this,” said Prof Brian O’Connell, AIMS South Africa Trustee and former Rector and Vice-Chancellor of the University of the Western Cape. He was speaking at the AIMS South Africa Graduation which took place at the Muizenberg Pavilion on Tuesday 23 June 2015, where 43 students (including 19 women) from 18 African countries received Master’s Degrees in Mathematical Sciences.

AIMS South Africa is part of a pan-African network of centres of excellence for postgraduate education, research and public engagement in the mathematical sciences. There are centres in South Africa, Sénégal, Ghana, Cameroon, and Tanzania. This graduation brings the total number of AIMS South Africa graduates to 579 and to over 900 across the network. As Prof. Barry Green, Director noted, “Our students will play a big role in contributing to the renewal and growth of the African continent.”

The students themselves had a lot to say about their experiences at AIMS, expressing their appreciation for quality of their education, the availability of tutors, the encouragement they received from lecturers and peers, and especially the exposure to people from a variety of cultures.

Ms Ephifania Geza, from Zimbabwe thanked AIMS for accepting her and making her part of the AIMS family, “We have been transformed for the betterment of Africa.”  Ms Reine Marquise Yemata Mekondjou, from Cameroon added, “What we are doing will change Africa tomorrow.” Mr Adebayo Abayomi Adeleke, from Nigeria said “It was by no means an easy voyage but these struggles have made this moment remarkable. I feel privileged, because I don’t deserve this. We received an outstanding education all at no charge, the guidance of established teachers and all these resources based on our status as talented. But we in turn must use what AIMS has provided us to benefit those who do not get this chance.”

A number of AIMS Scholarships were also presented at the AIMS Graduation Ceremony, for those students who had performed exceptionally in particular ways during their year of study.