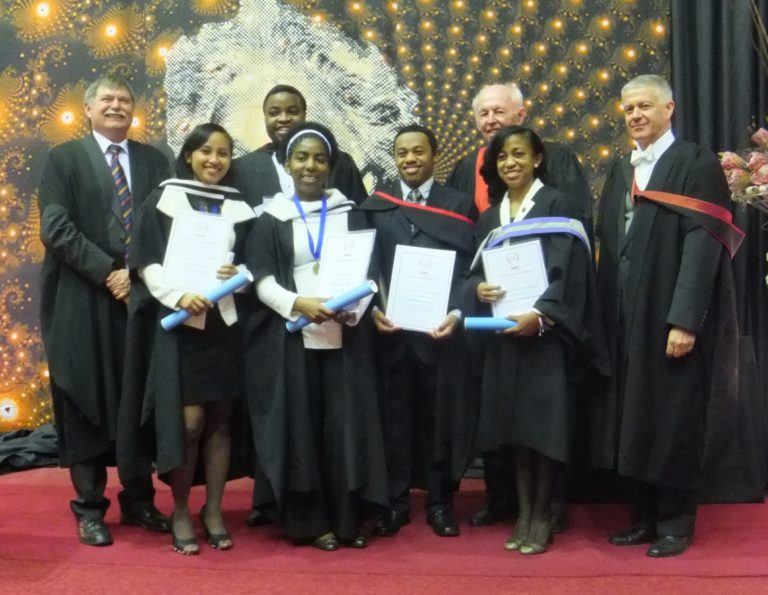 The African Institute for Mathematical Sciences South Africa celebrates a decade of academic excellence at a special graduation ceremony held today at the Muizenberg Pavilion in Cape Town. And for the first time the 49 students from 21 African countries were awarded a Master’s in Mathematical Sciences, bringing the total number of AIMS graduates since 2003 to 470, of which 30% are women. The event was attended by the organisation’s founder Professor Neil Turok and a number of dignitaries from academic institutions.

The ceremony commenced with an Academic Procession from AIMS in Melrose Road.

The opening speech was given by Prof Turok, to the graduates he said, “The whole world is watching you, you are the beginning of a wave. Just as a wave gradually builds and gains mass and momentum and then crashes on the shore. This is what is happening at AIMS, a wave is coming, a wave of young Africans. The world needs you, it needs talent, scientists, discoverers and problem-solvers.” He then reflected back on the opening of AIMS, “It seemed impossible in 2003, we barely had the resources to open AIMS and the first students that came had to help us finish the building and set up the library and now there is no other centre like AIMS. As soon as you walk in the door you can instantly feel the vibe. Determined to do impossible things in 2008 we established AIMS-NEI with the goal to open 15 centres across Africa.” He quoted former President Nelson Mandela,”It always seems impossible until it’s done.”

The guest speaker was Dr Loyiso Nongxa(former Vice-Chancellor, University of the Witwatersrand, who congratulated the students and AIMS for turning 10. But he noted as he quote “AIMS is just one stop in a long way and we need to give thanks to family members and all the people who made this possible, including the academics who come from all over the world to contribute their time.” He went on to describe the problems facing mathematics and he posed the questions, “Could the first African Field’s Medallist be seated in this room and could we perhaps in Khayelitsha, Guguletu or in the Cape Flats find our very own African Ramanujan? We surely hope so?”

AIMS Director, Professor Barry Green also noted that this year was the first time that the graduates were awarded Master’s degrees which made this ceremony even more special bringing AIMS-South Africa in line with the other AIMS Centres.

This year a special choir composed of AIMS Students and conducted by Prof Johan de Vililers of the AIMS Research Centre gave a sterling performance as part of the festivities.