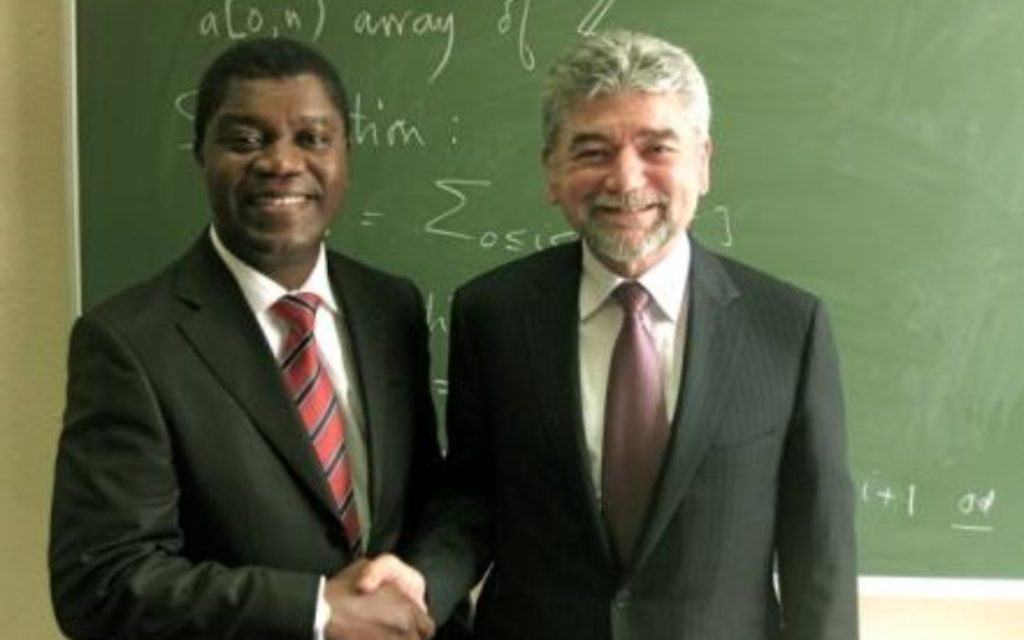 04 February, 2013 – Providing advanced, broadly applicable mathematical skills to talented students from across Africa, the African Institute for Mathematical Sciences Next Einstein Initiative (AIMS-NEI) today announced an important new initiative called the “AIMS Industry Initiative”. The announcement of the programme was made by the Canadian High Commissioner to South Africa, His Excellency Gaston Barban, during a visit to the AIMS centre in Cape Town. The initiative is a work placement programme through which AIMS graduates join the private sector for internships.

“AIMS is expanding its offering to some of Africa’s top mathematics and science graduates with the Industry Initiative by providing talented and motivated young people from across the continent with the opportunities to contribute to African development through industry. We look forward to driving the development of the continent through the creation of new centres, new partnerships and increased numbers of graduates. We invite the corporate world, especially those in Africa, to join the initiative and recruit Africa’s top talent from AIMS,” Executive Director of AIMS-NEI, Thierry Zomahoun said.

High Commissioner Barban was accompanied by representatives from CAE Mining, McCain Foods and Rio Tinto who anticipate partnering in the initiative by making internships available to AIMS graduates.

“I am delighted to see Canada’s support for higher learning, research, technology development and science through its investment in AIMS-NEI,” Barban said of the initiative. “Having established centres in Senegal and Ghana, AIMS-NEI is on its way to becoming a truly pan-African centre for excellence. I am pleased to see the private sector, including Canadian companies invested in Africa, supporting the AIMS work placement programme. This is a win-win initiative for both the companies and the graduates.”

In 2010, the Canadian Prime Minister, Stephen Harper pledged R181-million (CAD$20-million) to support the establishment of five AIMS centres across Africa by 2015. Known as the AIMS-Next Einstein Initiative (AIMS-NEI), the funding has contributed to the establishment of a coordinated network of centres of excellence, recruiting and graduating outstanding scientists.

AIMS celebrates a decade of success this year, having opened its first centre in 2003. Operating as a partnership between African and international universities, AIMS provides an innovative and relevant curriculum within a 24-hour learning environment. According to an alumni survey, as of June 2012, 442 students, 31% of them women, from 35 African countries have graduated from AIMS centres in South Africa and Senegal. Over 80% have gone into Master’s and PhD programs directly after AIMS at excellent universities in Africa and abroad.